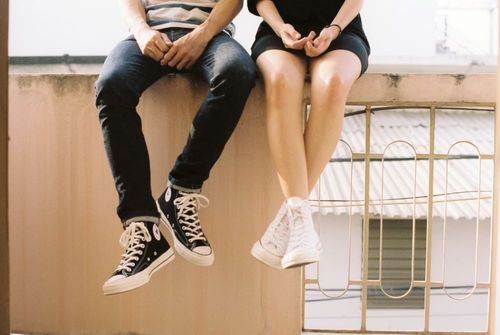 When people come to Hope Pregnancy Center for pregnancy testing or consultations, they often share with us stories of how they thought they couldn’t become pregnant or why they thought they were safe. Let’s look at some of the more common myths about unintended pregnancy and conception. If you are concerned you may be pregnant, text Hope Pregnancy Center today at 405-531-9011 or call one of our centers for an appointment for a free pregnancy test.

Myth #1: I Can’t Get Pregnant When I’m on my Period

This is one of the most common misconceptions about sex we hear. Many women think they cannot become pregnant during their menstrual periods. In truth, conception is possible for women during menstruation. The probability is low, but the possibility exists. Also, STDs or STIs (sexually transmitted diseases or infections) can be passed between partners any day of the month — even during menstruation.

Some people believe that having sex in a certain position makes it impossible to get pregnant. A related myth is that you can prevent pregnancy by positioning yourself a certain way after intercourse. Both of these ideas are false. Sperm can travel into your uterus and fertilize an egg no matter what position you are in.  In addition, a man’s sperm can stay alive inside your body for up to 5 days after sex, making the position you use irrelevant.

Myth #3: You Can’t Get Pregnant the First Time You Have Sex

Many young women believe if they are virgins, they cannot get pregnant the first time they have sex. A similar myth is you can’t get pregnant if you only have sex once or that you have to have sex multiple times in order to conceive.  In both of these situations, the truth is that the chance of conception exists any time you have sex, no matter if it’s your first time or not.

Myth #5: The Morning After Pill is for Everyone

The morning after pill is marketed as a safe way to prevent conception if you have had unprotected sex or if your birth control fails. However, the effectiveness of this medication varies depending on factors such as weight, the time it is taken after intercourse, and other medications you may be taking, such as barbiturates or St. John’s Wort. All of these factors lower the effectiveness of these medications and make pregnancy more likely to occur.

Birth control is often marketed as a safe way to prevent pregnancy with no downsides or serious side effects. Common side effects of these medications are spotting or bleeding between periods, nausea, breast tenderness, and headaches. However, there are other side effects that, while less common, can become serious, such as high blood pressure, blood clots, heart attacks, or strokes. If you are considering these medications, it’s important to talk with your doctor about any other medications you are taking and be informed of any potential risks.

To learn more about conception, pregnancy, sex, and relationships, contact Hope Pregnancy Center today.  Our caring staff will take time to listen to your concerns and answer any questions you may have. All of our services are 100% confidential and offered at no cost to you. Text us today at 405-531-9011 to schedule an appointment at one of our five centers in Oklahoma.  We’d love to meet with you.